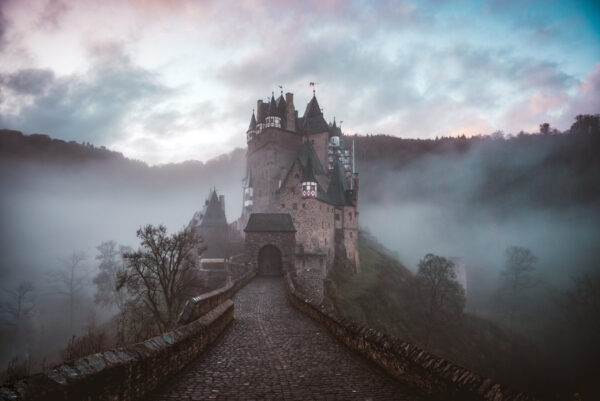 Magic. Romance. Kissing. What could be better? If you've often thought that the fantasy book you're reading could be improved upon with some smoldering looks and make out sessions, or that the romance novel you're enjoying could be even more perfect with some magical powers or supernatural creatures, then you're in luck! Here are fifteen of the best new fantasy romance books that will sweep you off your feet and spark your imagination!

Payback's a Witch by Lana Harper

Emmy Harlow is headed back to her hometown of Thistle Grove for a magical competition that occurs once every fifty year to determine which magical family will be the leaders for the next generation. Emmy hasn't been back in years, not since Gareth Blackmoore shattered her heart. Now, he's poised to win the competition...but then Emmy learns her best friend Linden and the mysterious and sexy Talia have both been burned by Gareth, and they want revenge. They want to know if Emmy is in, and she agrees...and soon finds herself falling for Talia.

The Ex Hex by Erin Sterling

Vivienne was heartbroken when she decided to hex her boyfriend Rhys hours after he dumped her. She wasn't thinking super clearly at the moment, but in the nine years since, she truly didn't believe that her sloppy little hex caused him that much grief...until they reunite in their hometown to recharge the ley lines and Vivi realizes Rhys's like is a walking disaster after that hex. Guilt-stricken she decides to help him break it, only to find that their chemistry is as strong as ever,

These Hollow Vows by Lexi Ryan

When her sister is sold to the Unseelie Court to pay off a debt, Brie will do anything to get her back, even if it means entering into an impossible bargain. In order to fulfill her tasks and win back her sister, Brie finds herself colluding with two unlikely young men: Prince Ronan, and Finn, a rebel leader. Soon, she's falling for both of them as she fights to keep her head and her heart true to her mission.

Vanessa Yu has the ability to see people's fortune in teacups, which has brought her nothing but complications and heartache. And when a matchmaking appointment her parents insist upon ends in an omen of death, Vanessa is all too eager to accept her aunt's invitation to Paris, where she hopes to dump her ability once and for all and find her own future...and maybe romance!

Empire of Sand by Tasha Suri

Mehr is the daughter of an imperial governor and a mother who comes from a nomadic people hunted by the imperial forces for their rumored powers. When it becomes apparent that Mehr has inherited her mother's gifts, she's put in a precarious position and finds herself using all her wits to resist tyranny while unexpectedly falling in love.

Within These Wicked Walls by Lauren Blackwood

In this Jane Eyre retelling inspired by Ethiopian mythology, Andromeda is someone who can ward against the Evil Eye. Cast out my her mentor, she's in desperate need of work, which is how she finds herself at Thornfield, an estate that's been cursed, along with its owner, the young, brooding Mr. Rochester. Andromeda has her work cut out for her, and by the time she realizes that it might be safer to flee, she's already falling for Rochester.

For the first book in a breathtaking slow burn romance, pick up this novel about Will, a dock boy in magical London who is on the run from some very bad who've already killed his mother. He's been told he has a great destiny, and soon finds himself in magical training for an epic fight that's to come...if he can survive long enough to see it.

In this genre-bending novel, Shizuka made a deal with a devil to save her own skin. She just has to deliver seven violin prodigies to him, and she'll be free. And when she discovers Katrina's wild talent, she knows that she's close to fulfilling her end of the bargain...but then she meets Lan, an interstellar fugitive and she finds herself falling in love and wondering if perhaps she can redeem her soul without handing over Katrina's.

Tamsin is a powerful witch who finds herself in exile after she cast a reckless spell. Wren is a magical source who never revealed her true nature, wanting to stay with her chronically ill father and tend to him. But when a magical plague sweeps the queendom, the two must strike a bargain in order to track down the dark magic causing the plague and save Wren's father...all while trying to resist falling for each other.

Under the Whispering Door by TJ Klune

When Wallace dies of a heart attack at 40, he can hardly believe it when no one seems to care that he's gone. His spirit is led to the ferryman, a man named Hugo who runs an eccentric tea shop in the woods. There, Wallace is expected to take some time, collect his thoughts, and move on. But he can't. For workaholic Wallace, death is when he truly learns how to live...and when he begins falling for Hugo, he's not sure he'll ever be ready to move on.

The Awakening by Nora Roberts

Breen's father always used to tell her stories of magic and intrigue as a child, but that was before he disappeared. Now Breen is in her twenties and saddled with student debt and uncertain about her future. So she's totally shocked when it turns out that her mom has been hiding an investment account in her name, created and funded by her father. It's now worth millions. Breen takes the money and heads to Ireland, where she discovers a portal in Galway that takes her to a magical land where fate and romance await.

King of Battle and Blood by Scarlett St. Clair

Isolde has one mission: to wed the vampire king Aleksandr and kill him. She's certain it shall be her own end, but she doesn't expect her mission to fail. But rather than turn her or kill her, Aleksandr spares her life and gives her a chance to be his consort, as long was she doesn't try to kill him. And despite representing everything Isolde hates, she finds herself falling for him.

Once Upon a Broken Heart by Stephanie Garber

Evangeline is heartbroken when her true love decides to marry another, and she'll do anything to stop the wedding. So she makes a bargain with the Prince of Hearts, a trickster who isn't to be trusted. In exchange for his assistance, he asks for three kisses. But three kisses are never just kisses when the Prince of Hearts is concerned.

In Cadence's world, magic is worked by being sung and Cadence is a powerful mage. But she's controlled completely by the despotic queen, who uses Cadence's powers to torture the nobility who have angered her. And when one young noblewoman, a one-time friend of Cadence's, crosses her path, she's brought before Cadence. Now, she must decide what's she truly stands for, and who she is truly loyal to.

Beasts of Prey by Ayana Grey

Koffi is an indentured servant at a zoo full of dangerous creatures. Ekon hopes to become an elite warrior and make his family proud. When a terrible and frightening beast that stalks Ekon's nightmares threatens them both, everyone is shocked to find that Koffi has the ability to ward against it. In order for Ekon to prove himself and for Koffi to earn her freedom, they team up to hunt the beast in the dangerous jungle...and uncover frightening secrets as they fall in love.

If you need more great book recommendations or the best new fantasy romance books, check out:

Want more swoonworthy fantasy? Sign up for TBR: Tailored Book Recommendations! TBR is a personalized book recommendation service that sends you books you'll love to read. Here's how it works: Simply fill out the reader survey and let us know what you want more of--such as fantasy romance--and what you're not keen on. Then, an expert Bibliologist will read your responses and recommend three books just for you. Receive your recommendation letter via email in about two weeks, or opt to receive your recommendations as brand new hardcovers in the mail in about three to four weeks.