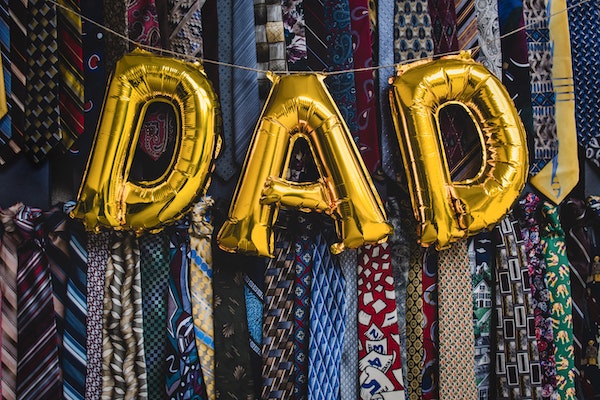 Father's Day is coming up, and we know that many of you struggle with what to get your dads! Books are always a great idea, but sometimes finding dad books are hard...but you definitely know one when you see it! We've rounded up some of the best new and upcoming books for dads so no matter what the father figure in your life likes to read, you'll find something that's sure to make him smile!

The Splendid and the Vile: A Saga of Churchill, Family, and Defiance During the Blitz by Erik Larson

Erik Larson's books are total dad catnip, and this newest release focuses on Churchill's efforts to keep moral high during WWII as London was bombed, but also the strain the war had on his immediate family. If your dad has already read this one, then try Churchill & Son by Josh Ireland!

Einstein's Fridge: How the Difference Between Hot and Cold Explains the Universe by Paul Sen

For the scientifically minded dad, this is a really great book about how the study of thermodynamics was developed, but written in an accessible way to demonstrate how the human understanding of hot and cold--and being able to control heat--changed our world forever.

Dirt: Adventures in Lyon as a Chef in Training, Father, and Sleuth Looking for the Secret of French Cooking by Bill Buford

This is a humorous memoir about how Bill Buford decided to move to Lyon, France to train to be a chef, and what was supposed to be a six-month interlude turned into a five-year detour with his family. It's a great gift for the chef dad in your life!

Pappyland: A Story of Family, Fine Bourbon, and the Things That Last by Wright Thompson

Pair this book with a bottle of your dad's favorite whisky for a great gift! Pappyland reveals the story of Pappy Van Winkle, known as the Bourbon Buddha, and his pursuit of making the best Kentucky bourbon in the business amidst remarkable struggles.

The Third Pole: Mystery, Obsession, and Death on Mount Everest by Mark Synnott

For a high-stakes thrilling true adventure, gift the story of Mark Synnott, a veteran mountain climber who decided to scale Mount Everest with the goal of solving a mystery nearly a century old regarding the disappearance of George Mallory and Sandy Irvine, two climbers who hoped to be the first to reach the highest point in the world. But Synnott's own climb was plagued by disaster, too.

If your dad is a fan of Matthew McCounaughey's work, this is an essential memoir full of his ruiminations on life, love, and success, and how to be a good person. It's drawn from over thirty-five years of diaries he's kept about his journey, and contains the wisdom he's learned.

Kindness and Wonder: Why Mister Rogers Matters Now More Than Ever by Gavin Edwards

For so many, Mr. Rogers is a cultural icon that taught kindness and wonder in equal measure, and left a lasting impression on so many kids. This book explores Mr. Rogers' legacy and creative visions, and his enduring impact and relevance even now.

For the dad who enjoys history and crime, this is an incredible true story about the birth of CSI and forensic science on the West coast of the U.S. in the 1930's, focusing on Edward Oscar Heinrich, a remarkable scientist and one of the nation's first expert witnesses on forensic science.

Part travelogue, part golf memoir, part history, this book is the perfect gift for the golf-loving dad. It follows Tom Coyne's journey across the U.S. playing at some of the most sought-after courses in the U.S., and some of its best hidden gems from coast to coast.

The Office: The Untold Story of the Greatest Sitcom of the 2000s: An Oral History by Andy Greene

The Office is one of the most popular and most-referenced shows in American pop culture, and in this book Andy Greene dives into the making of the show and its lasting impact, divulging new details.

Every Tool's a Hammer: Life Is What You Make It by Adam Savage

If your dad is handy, then he might enjoy this book about Savage's exploration of life through the things he's made and repaired, the wisdom he's learned, and how it can be applied to all aspects of life.

North by Shakespeare: A Rogue Scholar's Quest for the Truth Behind the Bard's Work by Michael Blanding

Shakespeare fans may be familiar with many scholar theories that Williams Shakespeare isn't the true author the now legendary plays and sonnets, but this book looks at this theory from a slightly different angle: by examining the lengths that one modern scholar went to prove that Shakespeare was a plagiarist, in between an in-depth history of the Elizabeth literary scene.

Beyond: The Astonishing Story of the First Human to Leave Our Planet and Journey into Space by Stephen Walker

For the dad fascinated by space, gift this nonfiction title about the first man to ever orbit Earth. He was launched into the atmosphere in a secret USSR mission, and his 108-minute flight made world history. This is a down-to-the-second report of that amazing flight.

Murder at the Mission: A Frontier Killing, Its Legacy of Lies, and the Taking of the American West by Blaine Harden

For the dad who is a history buff but also knows that this country was gained in an immoral land grab, gift this book that "[exposes] the hucksterism and self-interest at the root of American myth-making" and follows the first missionaries to cross the Rockies, and how their actions and lies led the U.S. to expand forcefully into the West.

The God Equation: The Quest for a Theory of Everything by Michio Kaku

For the dad who loves science and philosophy, Kaku explores how Newton's law of gravity changed our understanding of science, the heavens and earth, and what it means for religious ideas and scientific proof.

The Bookseller of Florence: The Story of the Manuscripts That Illuminated the Renaissance by Ross King

This history book illuminates the life and times of Vespasiano da Bisticci, a famous bookseller in 15th century Florence who rose to prominence at the same as one of the millennium's most exciting new technologies: the printed book. This is a book that will make you think more deeply about the Renaissance and the preservation and spread of knowledge.

Under the Wave at Waimea by Paul Theroux

If your dad is the fan of travel writer Paul Theroux, gift him Theroux's new novel about a sixty-something surfer losing his touch on the water when he accidentally kills a man. As the impact of the tragedy causes him to spin out, his girlfriend tries to uncover the dead man's identity so he can heal.

Terror to the Wicked: America's First Trial by Jury That Ended a War and Helped to Form a Nation by Tobey Pearl

For the true crime junkie and history buff, this is the story of the first trial by jury in colonial America, involving a runaway indentured servant who stabbed a Pequot man. In this account, readers see traces of a justice system that, for better or worse, would become the foundation of justice in the United States, and whose outcome had a direct influence on the forming of a nation.

In this quirky and slight book Johnny Sun collects essays, observations, personal stories, and illustrations in a charming volume, which also boasts a recipe for scrambled eggs that will make you cry.

Nuclear Folly: A History of the Cuban Missile Crisis by Serhii Plokhy

In a time where nations are re-arming themselves with nuclear weapons, it's important to revisit the events of the past. This is an international perspective on the Cuban Missile Crisis, the landmark event that nearly brought the world to nuclear war.

TBR is a personalized book recommendation service that offers gift subscriptions for tailored email recommendations, or hand-picked hardcovers in the mail! When you buy a gift subscription for your dad, he'll receive a survey via email to tell us a bit more about his likes, dislikes, and what he's already read, and then an expert Bibliolgist will match him with books for dads that he's sure to love! Learn more and start gifting now!