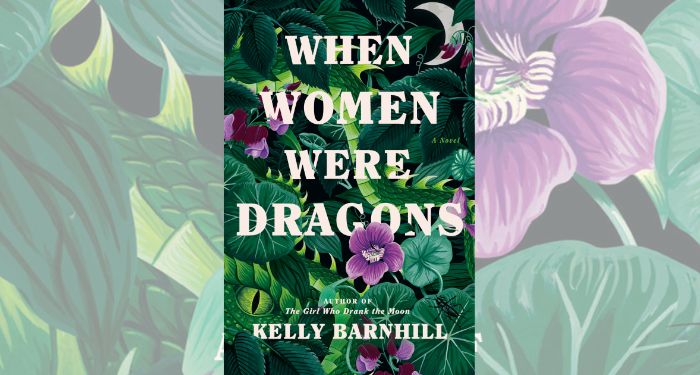 Kelly Barnhill is the Newbery Award winning author of many fantasy books for children, but lately she’s branched into the adult market with her adult historical fantasy debut, When Women Were Dragons. This is a perceptive and probing feminist novel about the nature of injustice, subjugation, and rage. If your book club has picked it up for discussion, then read on for a When Women Were Dragons book club questions and discussion guide! And if you’re looking for guidance on how to run a book club, we’ve got you covered!

When Women Were Dragons Summary

Alex Green is just a child when the mass dragoning of 1955 occurs. Over the course of a few short hours, hundreds of thousands of women across the country spontaneously turn into dragons and fly away, leaving behind a wake of destruction and heartbreak. In the immediate aftermath, speaking of the dragoning becomes forbidden by the government and taboo among society. Alex knows better than to bring up her beloved aunt, one of the many that dragoned. She left behind a baby Beatrice, whom Alex’s mother takes in as her own and Alex comes to love as a sister. As the girls grow up, Alex begins to understand the world that so many women fled, even as she fears the changes she sees in her beloved little sister. The truth can’t stay silent forever.

What did you think of the extended metaphor for women’s rage turning them into dragons? Did it feel too on the nose for you, or was it just right?

Alex tells this story as an adult looking back on her life. Do you think that she has had an overall satisfying life?

Consider the intense pressure to stay silent after the mass dragoning. What other historical events have been relegated to silence? What is lost if people aren’t allowed to speak of their experiences and trauma?

The taboo against speaking about the dragoning is obviously due to its connection with the feminine. Discuss how women’s bodies, experiences, and sexualities have been considered taboo over the years.

Consider Alex’s talents in the mathematics field, and all of the way that the men in her life try and push her out. How are her experiences in the 1960’s similar to attitudes still held today?

Alex is someone who has struggled with abandonment and isolation, both as a child and again as a teen and young adult. Why do you think she is so reluctant to open herself up to having a community and accepting help?

A turning point in Alex’s journey is when she encounters Mrs. Gyzinska in the library, who has a frank conversation with her about her current situation and following passage occurs: “Anger is a funny thing. And it does funny things to us if we keep it inside. I encourage you to consider a question. Who benefits, my dear, when you force yourself to not feel angry?’ She tilted her head and looked at me so hard I thought she could see right into my bones. She raised her eyebrows. ‘Clearly not you.” Why do you think Alex forces herself not to feel angry? Why is she afraid of feeling her anger?

This is a boldly feminist novel that explores all that is lost to upholding the patriarchy. Discuss the ways that the patriarchy is bad for everyone in the novel, not just for Alex and the women who dragon.

Throughought the novel, Alex never considers dragoning despite many women she knows and loves choosing that path. Why do you think that she never wants to dragon? What do you think Barnhill is trying to say about the fact that Alex never dragons?

Looking for more great feminist reads for your book club? Sign up for TBR: Tailored Book Recommendations! TBR is a personalized book recommendation service that sends you books you’ll love to read. Here’s how it works: Simply fill out the reader survey and let us know what you want more of—such as feminist literary fiction—and what you’re not keen on. Then, an expert Bibliologist will read your responses and recommend three books just for you. Receive your recommendation letter via email in about two weeks, or opt to receive your recommendations as brand new hardcovers in the mail in about three to four weeks. Learn more and sign up now!