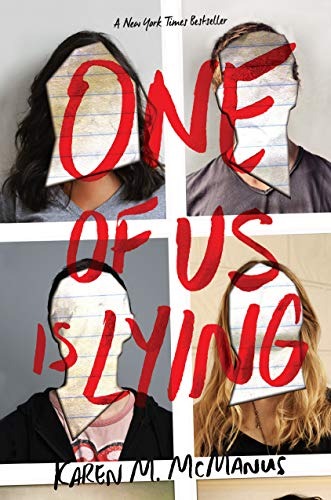 Murder, betrayal, dark secrets...all before the bell. One of Us is Lying by Karen McManus helped facilitate an explosion of new twisty murder mysteries that are set against the backdrop of social circles and high school life, and now there's going to be a TV series on Peacock that you can stream if you can't get enough! But in the meantime, get your fill of all things dark and twisty with these books like One of Us is Lying, from old favorites to the newest releases, all featuring twisty mysteries, dark secrets, and social groups or high school settings! They'll make your high school experience look like a walk in the park!

The Good Girl's Guide to Murder by Holly Jackson

Pip's town has been haunted by the tragic murder-suicide case involving a pretty senior and her boyfriend, and Pip has always felt that there was more to the story than what was made public. For her senior project, she decides to dig into the five-year-old case and see what she can unearth...and gets the shock of her life when she uncovers discrepancies that cast doubt on what is known. But someone doesn't want Pip asking questions, and they'll go to great lengths to shut her up.

Ace of Spades by Faridah Àbíké-Íyímídé

Devon Richards and Chiamaka Adebayo have just been made prefects at Niveus Private Academy, a dream come true. Being made a prefect will open doors to their future, and everything looks like it's going perfectly until an anonymous tester begins sending them messages, letting Devon and Chiamaka know that they know their secrets...and they're not above using them as leverage to get what they want.

How We Fall Apart by Katie Zhao

Nancy is shocked when her best friend Jamie dies, and even more shaken when an anonymous person calling themselves the Proctor implicate Nancy and her friends Krystal, Akil, and Alexander in Jamie's death. All four of them knew Jamie's secrets, and it seems like it could get them in trouble—or much worse.

Remy thought her life was nearly perfect—she had a ride or die best friend named Elise, and a fantastic and loving boyfriend in Jack. Until one night Jack ends up dead, and Elise is the one who pulled the trigger. How could this have happened? Remy will have to face some uncomfortable facts to get to the truth.

A Lesson in Vengeance by Victoria Lee

If you like that dark academia vibe with some fantasy elements, pick up this book about Felicity, mourning the death of her girlfriend while returning to Dalloway School, a place haunted with rumors or witchcraft and magic. When new girl Ellis asks Felicity to help her research the school's darker roots, she reluctantly agrees...and gets pulled into darkness she couldn't have imagined.

They Wish They Were Us by Jessica Goodman

Jill knows that darkness lurks under the facade of perfection in her hometown—her best friend was murdered by her boyfriend freshman year. But that's in the past, and now that Jill is a senior and a member of the not-so-secret society at her school, she's looking forward to a great year. Until she begins to receive messages saying that her best friend's boyfriend is innocent...and a killer is still on the loose.

A Line in the Dark by Malinda Lo

Jess is in love with her best friend Angie, but afraid to tell her. When Angie falls for the beguiling girl from the elite boarding school up the road, Jess is privately devastated, but she stands by Angie...even when it's obvious her new girlfriend is no good, and neither are her friends. And then when a shocking crime occurs, Jess is at the ready to protect Angie, no matter what.

As I Descended by Robin Talley

In this retelling of Macbeth, set at an elite boarding school, Maria Lyon and Lily Boiten are the school's power couple and they'd do anything to secure Maria a much-needed scholarship that will ensure they'll stay together, and continue on to college together. Even if that means taking down Delilah, Maria's competitor for said scholarship, and calling upon an old dark power rumored to live on campus.

Stevie Bell is a true crime devotee who is dead-set on solving one of the oldest, most puzzling cases in the country. To that end, she secures a spot at Ellingham Prep, the site of a disappearance and murder case perpetuated by an unknown figure known as Devious...and gets the shock of her life when a new crime and evidence points to the fact that this seventy-five-year-old cold case might not be so cold.

The Obsession by Jesse Q. Sutanto

Logan loves Delilah, she just doesn't know it yet. Yet when Logan stalks her, he discovers her darkest secret—she caused the death of her mom's abusive boyfriend. Now the two are engaged in a cat-and-mouse game set against the backdrop of their fancy private school where Delilah is determined to escape and Logan wants to make sure she's his...forever.

All Avery wants is to do well in school and win a scholarship so she can leave home, but her world is turned upside down when a billionaire leaves her his vast fortune. The only problem? Avery has no idea who he is or why she's his beneficiary. And in order to collect her inheritance, she must enter the Hawthorne estate, where she must contend with the three very unhappy grandsons of the billionaire whose fortune she now lays claim to.

If you like your thrillers with a side of horror, pick up this book about four teens named Alissa, Sky, Miles and Mint who are excited to go to an escape room together. But what starts out as a fun diversion soon turns into a nightmare are they realize there might not be any escape.

Mr. Griffin is the most feared teacher at Del Norte High, and everyone, even good students like Susan, fear him. So she agrees to join a group of her classmates who want to pull a prank on Mr. Griffin and teach him a lesson. Only, when the prank goes wrong and someone ends up dead, Susan has to face that fact that one of them is a killer.

This Lie Will Kill You by Chelsea Pitcher

A year ago, a teen was killed at a party that got out of control and five classmates all had a role to play in that death. Now, those same five teens arrive at a secluded mansion, expecting to compete for $50,000—but that turns out to be an elaborate farce designed to get them there so someone can take revenge.

All Your Twisted Secrets by Diana Urban

Playing on the tropes of classic cliques, this is about an eclectic mix of students who are invited to a scholarship dinner, only to discover it's all a devious ploy. They're locked in a room with a bomb and syringe of poison and told they must pick someone to die, or they all will die...and together must face a year's worth of incidents that led to this shocking night in order to discover the truth.

Want more great YA reads and books like One of Us Is Lying? Check out our recommendations for the best YA book club picks, and the 20 best YA books of 2021!

If that doesn't satisfy, sign up for TBR: Tailored Book Recommendations! TBR is a personalized book recommendation service that sends you books you'll love to read. Here's how it works: Simply fill out the reader survey and let us know what you want more of--such as fairy tales for adults--and what you're not keen on. Then, an expert Bibliologist will read your responses and recommend three books just for you. Receive your recommendation letter via email in about two weeks, or opt to receive your recommendations as brand new hardcovers in the mail in about three to four weeks. Learn more and sign up now!