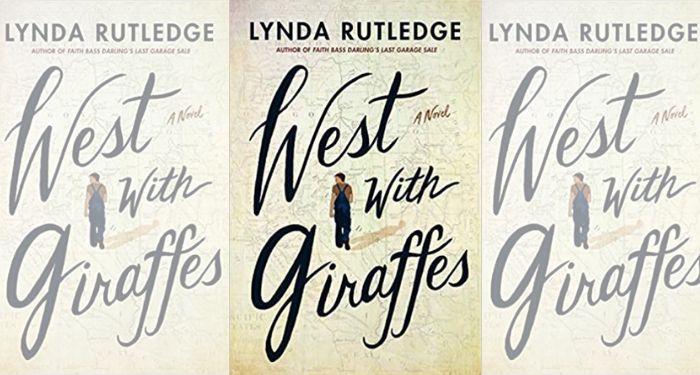 Lynda Rutledge’s novel West with Giraffes is a new book club favorite! This historical coming-of-age novel is a best-seller and critically acclaimed, and it’s the perfect book club read. To get ready for your next book club meeting, check out our guide for how to run a book club, and then look over the West with Giraffes book club discussion questions we’ve prepared to help your discussion run smoothly!

In the year 2025, at age 105, Woodrow Wilson Nickel reads that giraffes are becoming extinct, and suddenly memories come rushing back. In 1938, the Great Depression is not yet a memory in the United States, and Hitler is becoming a major threat in Europe. Two giraffes miraculously survive a dangerous Atlantic crossing during a hurricane, and young Dust Bowl survivor Woodrow is hired to drive them across the country to the San Diego Zoo in a specially constructed truck. The 12-day drive is just the beginning of his adventures.

The Great Depression, the Dust Bowl, endangered and extinct species, human’s relationships to animals, how childhood shapes us as people, treatment of the elderly, the power of storytelling

Before you launch into your discussion, it might be helpful to come up with an icebreaker question to help get the conversation flowing. These can be silly or fun, and are not meant to be taken too seriously. For this discussion, try asking: What is your favorite road trip memory? Whether it was a relatively short drive or a long one like Woodrow’s, what was one interesting thing that happened on the road?

Looking for more great book club content or recommendations? Check out our lists of historical books set in the 1950s and the best historical fiction novels.

If you’re looking for even more great book club recommendations, try TBR: Tailored Book Recommendations! TBR is a personalized book recommendation service that sends you books you’ll love to read. Here’s how it works: Simply fill out the reader survey and let us know what you want more of and what you’re not keen on. Then, an expert Bibliologist will read your responses and recommend three books just for you. There are two subscription options: receive your recommendation letter via email in about two weeks — perfect for library users! — or opt to receive your recommendations as brand new hardcovers in the mail in about three to four weeks. Learn more and sign up now!