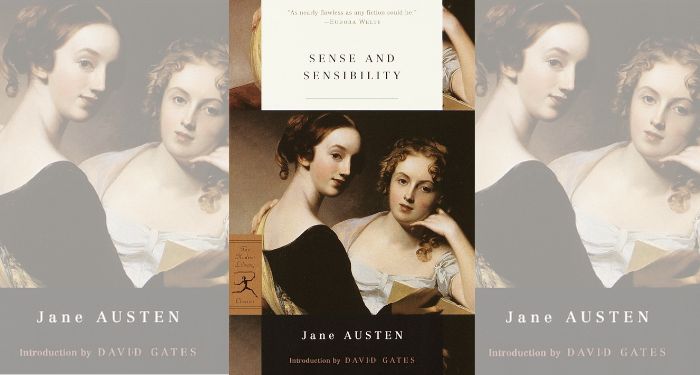 A SENSE AND SENSIBILITY READING GUIDE

ABOUT SENSE AND SENSIBILITY

Sense and Sensibility was Jane Austen’s first published novel, and it explores how the lives of the Dashwoods are changed forever when their father dies, leaving them with very little money. Mrs. Dashwood and her daughters Elinor, Marianne, and Margaret move into Barton Cottage rather than stay on at their home of Norland Park, which is now owned by Mr. Dashwood’s son from a previous marriage and his odious wife Fanny. The novel follows the two older sisters, Elinor and Marianne, as they acclimate to their new lives–and new positions in society–and each experience a chance at romance and happiness, if they can successfully navigate the emotions and sensibilities of their time.

Readers unfamiliar with reading novels written in the early 19th century might be unused to the flow and language. It’s important to try and pace yourself–don’t expect that you’ll read this book in a single sitting!–but also make sure you give yourself plenty of time when you pick up the book to allow yourself to be immersed into the world and get used to the style. This is not a novel that is easily read ten minutes at a time.

It might also be useful to understand before you begin reading that society at the time valued sensibility over sense–that is, strong emotions, feelings, and instinct reigned over reasoned thinking. Keep this in mind as you read, as this perspective will reveal Austen’s intent and message in this novel.

You might wonder why Mrs. Dashwood and her daughters have to leave their home of Norland Park at the beginning of the novel. This is because Mr. Dashwood’s state is entailed to go to his male heir, so Mr. Dashwood had no choice but to leave his estate to his son, who is independently wealthy and married well. An entail took generations of male heirs agreeing to break it, which meant that it was very difficult to break. Most men in Mr. Dashwood’s position would save money to leave to their female dependents in the event of their deaths, but Mr. Dashwood did not sufficiently save for his wife and daughters’ future. That left them entirely dependent upon the male family members in their lives, and as you read you will note that while their brother is predisposed to help out his sisters and their mother, his wife Fanny talks him out of it.

The Dashwoods were left to live on the charity of others for they could not work without sullying their reputations. And if they sullied their reputations, then none of the three Dashwood sisters could ever hope to find husbands. In this time, finding a husband was the quickest path to security for young ladies, who had very little power to make their own ways in the world. The Dashwoods may be poor, but they have a good reputation and they conduct themselves well, which gives them a slight advantage over Lucy Steele and her sister, who similarly are poor and must rely on the good will of others in order to meet people in society.

Young men also had to worry about money, although they had much more freedom than young ladies during this period. A young man either had family wealth (which his parents or elders shared by giving him an allowance), inherited their wealth and title, or they made their own livings. For young gentlemen, there were few trades or skills that allowed them to work for a living while also still enjoying the esteem of high society—becoming an officer in the Army or Navy, joining the clergy and securing a good living, or becoming a doctor of lawyer. If a young man didn’t wish to work for a living and had no family money or inheritance, then he would seek a wealthy young lady to marry, as she would often bring a large dowry into the marriage. These financial considerations certainly affected how young ladies and gentlemen went about courtship.

Jane Austen knew about these dynamics firsthand, and there are many parallels from her life that can be found in this novel. Her father was a clergyman who was able to provide a living for his family, but he was not wealthy. Jane’s brother Edward was adopted by their father’s wealthy patron, who gave him his living as a clergyman, and he was brought up by the childless couple and eventually took their name and inherited their estates. It was Edward who, when he inherited his estates, finally gave Jane and her mother and sister a permanent home in Chawton Cottage after they’d spent a number of years living with family and friends all over England, with no permanent home.

Discuss the role of money in this book–how is it used to reveal character?

Which sister did you gravitate towards the most? Which did you consider to be the heroine of the novel? Or did they both share that duty?

Discuss how Elinor and Marianne each embody the essences of sense, and sensibility. Do you think that each could have benefited from being more like the other?

What were your first impressions of Edward Ferrars? Willoughby? Colonel Brandon?

Did you think that Colonel Brandon’s attraction to Marianne was realistic? Did you think that he and Elinor were, on paper, more suited to each other? Did you find the age difference between Brandon and the Dashwood sisters hard to get past?

Politeness in society was valued over honesty during this time period. Knowing that, what did you think of the Middletons and Mrs. Jennings, and their meddling actions in the Dashwood sisters’ love lives?

What did you think of Lucy Steele? Did you trust her at first, or were you suspicious of her eagerness to befriend Elinor?

What did you think about the practice of secret engagements? Are they a result of sense, or sensibility?

Which sister seems to change the most over the course of the novel? Discuss Elinor and Marianne’s character development and growth. Do you think their growth is realistic?

What did you think about Willoughby’s apology? Did you feel sympathetic towards him? Whether you feel sorry for him or not, discuss the societal constrictions he faced as well.

Do you think Marianne and Colonel Brandon will be happy together? Elinor and Edward Ferrars? Lucy and Robert Ferrars? Do you believe that their marriages are a result of sense or sensibility? Based on your answers, do you think that Austen was making a statement on the foundation of marriages?

Was this your first Austen novel? How would you compare this book to her other work? Does knowing that Sense and Sensibility is Jane Austen’s first published novel alter your impression or opinion of the book at all? Will you read another Jane Austen novel?

THE BEST SENSE AND SENSIBILITY QUOTES

“It is not time or opportunity that is to determine intimacy;—it is disposition alone. Seven years would be insufficient to make some people acquainted with each other, and seven days are more than enough for others.”

“I will be calm. I will be mistress of myself.”

“Elinor agreed to it all, for she did not think he deserved the compliment of rational opposition.”

“Marianne Dashwood was born to an extraordinary fate. She was born to discover the falsehood of her own opinions, and to counteract, by her conduct, her most favourite maxims.”

“To wish was to hope, and to hope was to expect…”

“I have not wanted syllables where actions have spoken so plainly.”

“It is not what we think or feel that makes us who we are. It is what we do. Or fail to do.”

“There is something so amiable in the prejudices of a young mind, that one is sorry to see them give way to the reception of more general opinions.”

“The more I know of the world, the more I am convinced that I shall never see a man whom I can really love. I require so much!”

“Know your own happiness. You want nothing but patience—or give it a more fascinating name: call it hope.”

WHAT TO READ AFTER SENSE AND SENSIBILITY

Incense and Sensibility by Sonali Dev

Sass and Serendipity by Jennifer Ziegler

The Dashwood Sisters’ Secrets of Love by Rosie Rushton

The Cookbook Collector by Allegra Goodman

Sense and Sensibility by Joanna Trollope

Want more great book club discussions? Check out our best book club books of 2020. And if you’re looking for something specific for your next book group meeting, sign up for TBR: Tailored Book Recommendations! TBR is a personalized book recommendation service that send you books you’ll love to read.

Here’s how it works: Simply fill out the reader survey and let us know what you want more of–such as classic books for book clubs–and what you’re not keen on. Then, an expert Biblioligist will read your responses and recommend three books just for you. Receive your recommendation letter via email in about two weeks, or opt to receive your recommendations as brand new hardcovers in about three to four weeks. Learn more and sign up now!