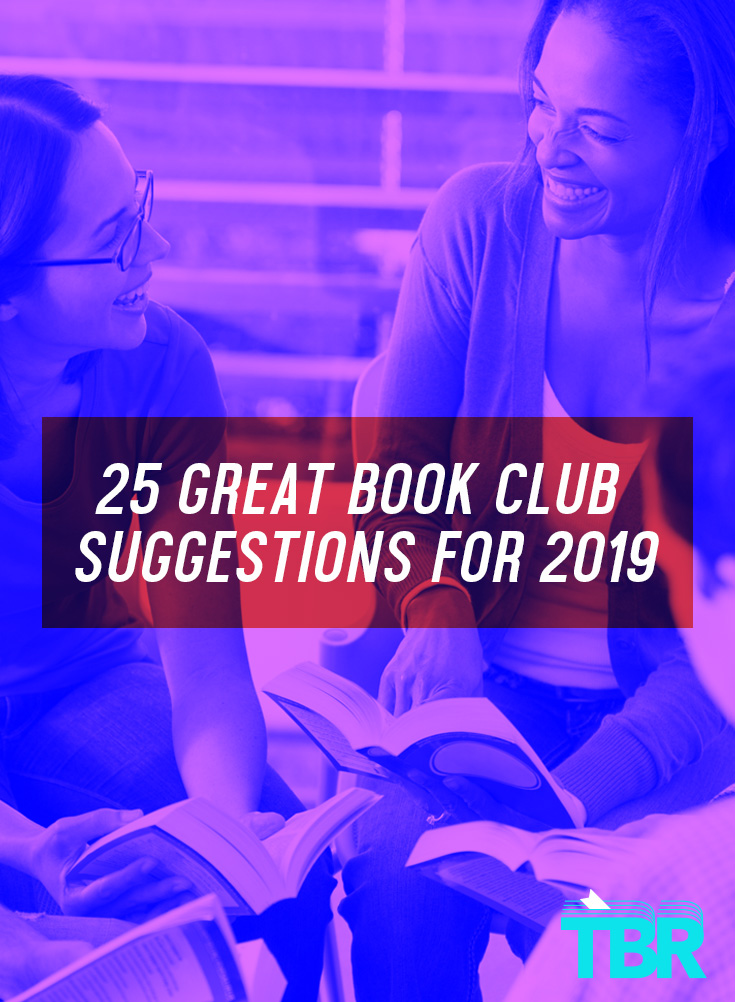 The year is almost halfway over, which means a lot of great book club suggestions for 2019 have been released. Which is good news for you! Below you'll find a new list to help you with your book club picks for 2019. Because, really, there are millions of books in the world, yet somehow choosing one for the group is hard. Especially because you know that no matter what you pick, not everyone is going to like it. (We're looking at you, Susan.) But with this handy guide for book club recommendations for 2019, you'll have the best options out of anyone!

The best book club suggestions in 2019

Written to mimic a tell-all oral history, this is a compelling novel about the rise and fall of a 1970s rock group and their enchanting lead singer.

From Scratch: A Memoir of Love, Sicily, and Finding Home by Tembi Locke

Locke's beautiful memoir about her marriage to an Italian chef, the challenges they faced, the family they started, and his devastating illness. It's one of the best book club suggestions for those groups who love a good cry.

As Long as We Both Shall Live by JoAnn Chaney

A twisty, dark page-turner, about two detectives trying to bust a man who appears to have gotten away with murdering two of his wives.

Powerful stories about mothers and daughters and meditations on home, featuring Latinas of Indigenous descent living in the American West.

Sooner or Later Everything Falls Into the Sea: Stories by Sarah Pinsker

Unique, wildly imaginative stories for fans of speculative fiction, ranging from a prosthetic arm that thinks its a road, to a murder mystery at a writer's retreat with several versions of the same author..

The Bride Test by Helen Hoang

Charming - and smoking hot - romance, about a young woman who flies to California from Vietnam at the request of a woman who hopes to find a bride for her sun.

The Last Romantics by Tara Conklin

Wonderful novel about four sibling who raise themselves after their father dies and their mother gets in bed and stays there for three years.

The Valedictorian of Being Dead: The True Story of Dying Ten Times to Live by Heather B. Armstrong

True story of Armstrong's experience with a new treatment for suicidal depression, in which patients are put under until they are clinically brain dead for several minutes, and then brought back.

Amazing debut about an experimental medical device that catches fire and kills two people, and the courtroom drama surrounding the injured, the owners, and person believed to be responsible for the incident.

The Honey Bus: A Memoir of Loss, Courage and a Girl Saved by Bees by Meredith May

May's touching memoir about being abandoned by her parents and growing up with her grandfather, who taught her a love for the natural world through the honeybees he raised.

Profound science fiction stories from the acclaimed author of Stories of Your Life and Others—the basis for the Academy Award–nominated film Arrival.

I Miss You When I Blink: Essays by Mary Laura Philpott

Funny, relatable essays about Philpott's experience with OCD and perfectionism, and how her life changed when she started allowing herself to mess up.

A haunting parable about a young boy, a famous artist, a spooky legend, and the quaint village where they all reside.

Based on a true story, this outstanding novel is about a young African American woman, who is ignored and mistreated at her job as an FBI agent in the 1980s, so instead goes undercover on assignment for the CIA.

Maybe You Should Talk to Someone: A Therapist, HER Therapist, and Our Lives Revealed by Lori Gottlieb

In this wildly interesting book, Gottleib, a therapist, discusses her own experiences with therapy, and the practice in general.

The true story of author Harper Lee's attempt to write her own true crime book - and why it never happened.

Thick: And Other Essays by Tressie McMillan Cottom

Delightful and smart essays about everything from Saturday Night Live, LinkedIn, and BBQ Becky to sexual violence, infant mortality, and Trump rallies.

Naamah: A Novel by Sarah Blake

Blake's surreal, sensational novel looks at Naamah, the wife of Noah, who was the voice of reason when her husband started talking to God.

For young adults fans, a fantastic story about a teen mom who wants to be a famous chef, and how she has a shot at reaching her dreams, but isn't sure she should.

Flowers over the Inferno by Ilaria Tuti, Ekin Oklap (translator)

For lovers of detective novels, this is a great first book in a series about an aging Italian detective who is starting to lose her memory, and the young officer who helps her on a particularly gruesome case.

For fans of hard science fiction, this is a perfectly plotted novel about the new ambassador to the multi-system Teixcalaanli Empire, who arrives amid political turmoil, and discovers her predecessor's death wasn't an accident.

A gripping thriller about a famous painter who murders her husband, and then stops speaking, and the doctor at the facility where she is jailed who thinks he can get her to talk.

And last, but not least, if you want the year's most divisive book, that members will either really LOVE or really HATE, go with this fabulous, thought-provoking novel about high school love and predatory behavior.

For more great book club suggestions, or reading ideas for yourself, visit mytbr.co to sign up for personalized book recommendations sent straight to your inbox or mailbox! Forget about pleasing Susan: Treat yourself to books tailored to your own tastes.