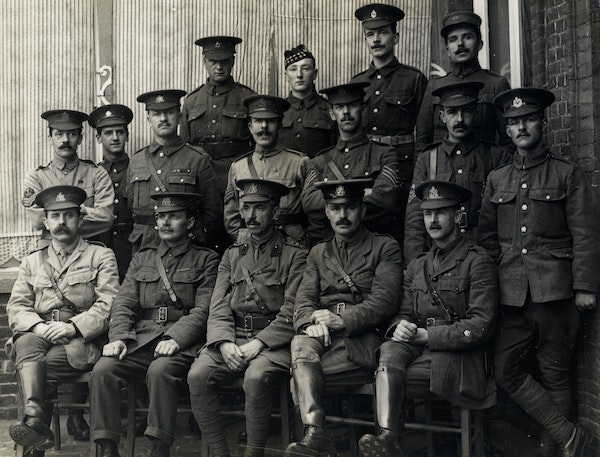 A little over a century ago, the Great War broke out Sarajevo, when Archduke Franz Ferdinand and his wife Sophie were shot to death. From there, nations began declaring war and the struggle that ensued from 1914-1918 became one of the most horrific and widespread wars to date. It was the first conflict where modern technology such as airplanes and chemical weapons were used, redefining humanity's concept of war. It's impossible to understand such a monumental event with simply one book, so we've rounded up a list of the best World War I books, fiction and nonfiction, that you must read.

Note: Most books about WWI are written by white people. Publishing still needs to improve upon diversity and inclusion in this subgenre.

No Man's Land: The Trailblazing Women Who Ran Britain's Most Extraordinafry Military Hospital During World War I by Wendy Moore

In this riveting nonfiction book, Moore tells the story of Drs. Flora Murray and Louisa Garrett Anderson, who set up a hospital in a luxury hotel in Paris in 1914, and were so successful treating wounded soldiers that they were asked to establish a hospital in London, forever changing how female doctors practiced and helping numerous patients.

Set in Russia in 1917, Katya isn't certain of her political beliefs, but she knows that she wants Russia to win the war against Germany. She enlists in the country's first female battalion, and begins training--but there's no way for her to fully comprehend the realities of war until she's sent to battle.

A Hobbit, a Wardrobe, and a Great War: How J. R. R. Tolkien and C. S. Lewis Rediscovered Faith, Friendship, and Heroism in the Cataclysm of 1914-1918 by Jospeh Loconte

WWI is known for inspiring a generation of literature centered around humanity and the cruelties of war--for many of these writers, it symbolized a loss of faith. But for others, the opposite was true. Luminaries Tolkien and Lewis both served in WWI, and what they survived deepened their faith and led them to create some of the greatest works of fantasy literature in the English canon.

The Winter Soldier by Daniel Mason

Lucius is a medical student in Vienna when war breaks out, and he enlists to become a battlefield medic, driven by ideals of saving lives with surgery. But when he arrives at his outpost, he finds that he's the only doctor in a forsaken place where men are sick and dying and only a mysterious nurse has stayed to help him treat patients. And their lives are forever changed when Lucius chooses to treat a stranger.

Although this book isn't directly about WWI, the events of this nonfiction account were largely spurred on due to war efforts. When Marie Curie discovered radium, it was seen as a miracle element. Factories employed women to paint watch faces with radium so soldiers could read them in the trenches...but then the factory women began to fall ill and die in rapid numbers, launching an investigation into the true destructive nature of radium.

In this novel, American Eliza is fast friends with Sofya, a cousin to the Romanovs. She visits Russia with Sofya's family in 1914, just as war is breaking out, and quickly finds that Russia is no longer safe for her. She escapes back to the United States while Sofya's family retreats to the countryside, and Eliza begins to fear the worst when Sofya's letters stop, even as she continues to help Russian emigres find safe haven in New York.

George, Nicholas and Wilhelm: Three Royal Cousins and the Road to World War I by Miranda Carter

What few people realize is that in the early years of the twentieth century, Russia, Germany, and England were all ruled by a trio of cousins, descended from Queen Victoria. This book looks at their parallel lives, upbringings, and years ruling to help readers understand their part in one of the most devastating wars of the century.

Last Christmas in Paris by Hazel Gaynor and Heather Webb

In 1914, Evie waves her brother and his best friend Thomas off as they head to war, and the three make naive plans to meet in Paris for Christmas. As the war years stretch out, Evie and Thomas exchange letters, but have very different war experiences. Fifty years later, Thomas returns to Paris to fulfill a long ago promise, and finds one more letter waiting for him...

The Great Rescue: American Heroes, an Iconic Ship, and the Race to Save Europe in WWI by Peter Hernon

When war broke out in 1914, a German luxury liner was interned in New York Harbor and wasn't permitted to sail back to Europe. When the U.S. entered the war, the Navy seized the ship and refurbished and renamed is the USS Leviathan, where it would go on to become one of the most feared and wanted ships on the Atlantic.

A Bend in the Stars by Rachel Barenbaum

Miri is studying to become a surgeon and her brother is a brilliant physicist when war breaks out in 1914. Although they've been brought up by their grandmother to distrust authority and always be ready to run, they hesitate at news of unrest, and then Miri's brother and fiancé disappear, forcing her to risk her life during a solar eclipse to find out what happened to them.

War Fever: Boston, Baseball, and America in the Shadow of the Great War by Randy Roberts and Johnny Smith

If you want to understand what America was like in 1918, a time of war, illness, and uncertainty, then you need to pick up this book that looks at the lives of three men living in Boston at the time--a German conductor, a Harvard Law graduate, and Babe Ruth.

The End of Innocence by Allegra Jordan

Based on the true story of a controversial World War I memorial at Harvard University, the book is about Helen, a young woman at Harvard-Radcliffe who meets a British playboy and his German cousin and becomes fast friends with them. But when both cousins must go home to find on opposite sides of the war, Helen must take her own stand for what's right.

The Great and Holy War: How World War I Became a Religious Crusade by Philip Jenkins

In this book, historian Philip Jenkins examines the religious influences that worked hand in hand with the political factors influencing WWI, and how the war affected modern Christianity, Judaism, and Islam--giving rise to more genocide and terror later on in the century. including Nazism and the Holocaust.

The Victory Garden by Rhys Bowen

When Emily's Australian fiancee is sent to the front, she wants to do more for the war effort, and so she becomes a land girl, tending the fields on an all-but-forgotten estate. It's there that she discovers books written by a mysterious medicine woman that help her understand nature and the land--all which prove to be her saving grace when disaster strikes.

It's impossible to study World War I without understanding how the Spanish influenza pandemic affected the war efforts. In this book, Arnold looks at how the influenza spread between troops and civilians alike, and how the medical community was unable to respond adequately due to being stretched thin thanks to the war.

Here's how it works: Simply fill out the reader survey and let us know what you want more of--such as WWI fiction or nonfiction--and what you're not keen on. Then, an expert Biblioligist will read your responses and recommend three books just for you. Receive your recommendation letter via email in about two weeks, or opt to receive your recommendations as brand new hardcovers from our partner, Print: A Bookstore in Portland, ME in about three to four weeks.